This is the blog for Robert Vincent, Chief of Police for the Gulfport (Florida) Police Department. Please feel free to leave comments, but keep in mind that anything appearing on this page may be subject to retention and disclosure in accordance with Florida public records law.

Please keep your posts clean and respectful. Comments are subject to review, and I do not permit lewdness, obscenity, or personal attacks.

I started working for the Gulfport Police Department twenty years ago. Almost twenty years before that, my father used to bring me down to the beach on the weekends so I could climb on the monkey bars at the playground. In that nearly forty years, a lot has changed in this town, most of it for the better. In other areas, progress seems a bit slow. Look at 49th Street.

Four lanes of asphalt, no more than 100 feet wide, separate the City of Gulfport from the Greater Childs Park Area (GCPA) of St. Petersburg, which includes all of the Childs Park neighborhood as well as portions of three others (Oak Park, Twin Brooks, and Perry Bayview). As long as I can remember, this border road has not only served as a political boundary; it has represented a divide between two very different cultures. Obviously the demographic variances contribute to this image. Gulfport is and has historically been comprised of a majority white population, while the GCPA is and has been predominantly African-American. So 49th Street separates a white neighborhood from a black neighborhood, but there’s much more to the picture than racial differences.

Let’s take a look at some numbers that actually matter. Census tracts 208.00 and 201.01 encompass the St. Petersburg neighborhoods directly east of Gulfport—essentially the GCPA. Combined, these two tracts have a population and land area that is similar to that of Gulfport. The overall crime rate, however, is more than twice that of our town, and the violent crime rate is over five times higher than Gulfport’s (Table 1). These are rates that far exceed the averages for the City of St. Petersburg, Pinellas County, and the state of Florida. There is absolutely no question that the GCPA is a high-crime neighborhood; let’s just call that a given.

The problem is, all of this crime is literally happening right across the street. We work hard and do a great job of keeping crime rates low within Gulfport’s municipal borders, but that’s not much consolation to those who have to live and work on that particular border. While they may not be immediate victims of actual crimes, Gulfport residents who live near the GCPA experience the indirect impacts of that crime on a daily basis. This is why I repeatedly make the claim that we in Gulfport do not have a crime problem on 49th Street; we have a problem resulting from the perception of the crime occurring next door.

The question: how much can we do about it? I think our officers do an outstanding job considering the mere ribbon of pavement between us and the aforementioned high-crime neighborhood. We do what we do, how we do it because our constituents demand it. What we all have to realize and accept, however, is that what happens across the street is not up to us. The people who live in the GCPA are the ones who get to decide how their neighborhood is policed. They are the ones who set the enforcement priorities and dictate them to their representatives. We have no more right to tell them to tighten things up than they have to ask us to lighten up (believe me, they’ve asked).

The bottom line is this: any change to the crime rate in the GCPA must be driven by those who live there. If they don’t want things to change, then we in Gulfport will not have much of an impact.

Please don’t get the impression that St. Petersburg is ignoring this area. I want to point out that there have been some pretty impressive reductions in the GCPA crime rate since the implementation of a Strategic Planning Initiative under Mayor Baker’s administration in 2007. Overall crime has dropped 34% in this area over the past four years, while it has essentially remained static in Gulfport. While this is movement in the right direction, I intend work to encourage the new mayor and new police chief to take more proactive steps to further reduce violent crime in this area. When our residents are affected, our voice needs to be heard.

For our part, Gulfport has undertaken a few projects and programs to help improve the perception as well. New LED street lighting will be installed in January, making the roadway more visible at night. We’ve improved the signage at our office on 49th Street, making if more clear that it is home to the office of an actual police officer, and we’re in the process of installing high-visibility surveillance cameras on that building as well. We also added a full-time officer to handle recruiting and screening, which frees up our Community Resource Officer, Zach Mills, to spend more of his time focusing on policing the 49th Street area.

Of course, we won’t be able to measure the effect of any of these changes until this time next year. In the meantime, I’ll be looking forward to some positive changes in both perception and reality. Happy New Year everyone! 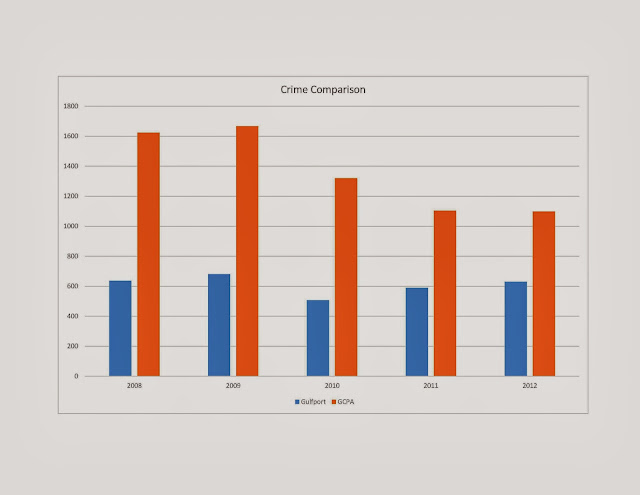 Posted by Chief Vincent at 4:10 PM No comments: