This is the blog for Robert Vincent, Chief of Police for the Gulfport (Florida) Police Department. Please feel free to leave comments, but keep in mind that anything appearing on this page may be subject to retention and disclosure in accordance with Florida public records law.

Please keep your posts clean and respectful. Comments are subject to review, and I do not permit lewdness, obscenity, or personal attacks.

Next week, I will be asking council for permission to use contraband forfeiture funds to purchase a new police car. This police car will be different from anything we have ever put in the fleet before--it's a Ford Fusion Hybrid.

You may be used to seeing Dodge Chargers and Ford Crown Victorias on the streets, as that's what we have been using for many years. These cars are necessary for the majority of police operations because they are among the few that meet the demanding specifications required for pursuit driving. However, we do have some officers working assignments where pursuits are very unlikely. School resource officers, for example, spend much of their time on campus, and their driving is limited to primarily non-emergency functions. That said, they still need real police cars because they are often called upon for traffic control (and those red & blue lights parked on campus make a pretty good deterrent).

Because the city is trying to meet standards for certification by the Florida Green Building Coalition, I thought we could do our part by putting a hybrid car into operation. With its four-door, midsize chassis and 41mpg city EPA rating, the Fusion seems like it will offer the best combination of efficiency and functionality. Making it an even better deal, we plan to pay for the $27,000 vehicle using funds from contraband forfeitures. In FY 09/10, the police department's proceeds from participation in the Pinellas County narcotic drug task force were nearly $28,000. This is in addition to seizures obtained through all other operations.

If all goes well, expect to see the Fusion Hybrid police car at Boca Ciega High School around the beginning of the year.

Here is a picture from leftlanenews.com depicting Ford Fusion Hybrids from NYPD, where they have a test fleet of over 100. 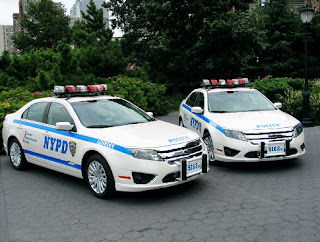 Well, this is my first divulgence into the world of blogging; hopefully it will turn out to be a successful venture.

I got the idea from Chief Alexander in Boca Raton, who has been blogging for several months now. I also took some suggestions from the International Association of Chiefs of Police, who have developed model policies and programs on using social networking as a tool for police departments to exchange information and ideas with their communities.

Statistics show that even not so old methods (e-mail, website development, instant media alerts) are just not fast or sufficient enough for today's social-driven population. One example: people check their Facebook page more frequently than their e-mail!

So I have come to the conclusion that there really is no way around it. The Gulfport Police Department has joined the social media world. This week we launched a facebook page and the Chief's Blog with the specific intention of sharing ideas and information with you, the people who live in, work in, and visit Gulfport.

I intend to post something roughly once a week, and I look forward to your thoughtful responses.
Posted by Chief Vincent at 11:52 AM 2 comments: